In 1966, the Reserve Bank of Australia placed an image on the reverse of it’s one dollar banknote. This now famous image was an aboriginal work of art titled the Gurrmirringu’s Mortuary Feast, which was painted by the famous aboriginal artist David Malangi. Unfortunately, David Milangi was not aware that his work was being placed onto the banknote until after it was printed and in circulation. The governor of the bank, Dr. Coombs, was made aware of this error which was a breach of copyright, and David Malangi was subsequently paid for the use of his image on the banknote. This incident was the first time in Australia that aboriginal art copyrights were honored.

Born in 1927 in Mulanga, Central Arnhem Land in Australia’s Northern Territory, David Malangi became an influential elder in the Yolngu people in the Arnhem aboriginal lands, one of the largest Aboriginal Reserves in Australia. His father and Uncle taught him how to paint in traditional methods on logs, bark and even people.

While the banknotes image of his artwork no doubt helped his fame grow, David Malangi was still a prolific artist whose works were in demand before his work was in everyone’s pocket.

His individual style of painting typically included white outlined subjects on black or ochre backgrounds with strong, bold lines and rarrk, which is an image comprised of cross-hatching lines in pigment. He preferred to picture the history and legends of his people and land including subjects like the Sea Eagle, Crow, Snake and a monitor lizard called a Goanna.

He participated in with other celebrated aboriginal artists in the collaborative Ramining Print Suite, a collection of paintings which related the creation story of the Wagalak Sisters, an aboriginal tale from Australia’s Northern Territory. The story evidently took place in a sacred land where no person, aboriginal or not, is allowed to go even today. The painting relates how the sisters kept their wisdom and special powers in ‘dilly bags’, bags woven from vines and grasses and worn around the neck. The bags carried a curse to all but the owner, ensuring the safety of the contents inside. The sisters would walk and use the ingredients in the bags to create the landscape. The sisters also kept the law and taught people how to live. One day, the sisters heard voices of nearby men and they went to investigate, leaving their dilly bags hanging on a tree. While they were out searching, the men emptied the forgotten dilly bags and stole the sister’s powers. Having lost their powers, the sisters had to live as regular people. One day they had caught some lizard and possum and were cooking them in a fire, but something went wrong. The animals, though they had been cooking for a while, got up from the fire and ran to the river. When one of the sisters bathed her child in the river, a dingo called Whatu was attracted by the scent of the child. The Dingo changed into a rainbow spirit and ate the child and the Wagalak sisters.

Another of his most famous works was the Gurrmirringu, or the First Man, which is depicted on the one dollar bill. This painting depicts the mortuary scene of Gurrmirringu with his body being prepared for the first burial by having the rarrk style cross hatching painting on the body. The prone Gurrmirringu is circled by seated ceremonial singers whose sacred songs send his spirit safely to its resting place. A berry tree, food, animals and hunters represent the feast that accompanies the funeral.

David Malangi was the artist in residence at Flinders University and also at Sydney University. He was also awarded with an honorary degree by the Australian National University in 1996. His work was exhibited in 2004 at the National Gallery of Australia.

David Malangi died in 1999. In Aboriginal Culture, the names of deceased are not spoken for several months, or depending on the particular regional custom, sometimes even years. In the meantime, the deceased are referred to by a different name. David Malangi’s other name is Daymirringu. He is still commonly referred to with this name.

The one dollar bill also has its coat of arms in aboriginal art style. A portrait of Queen Elizabeth II to whom Australia still holds allegiance, is depicted on the right. The dollar note circulated from 1966 until it was replaced in 1984 with a dollar coin. 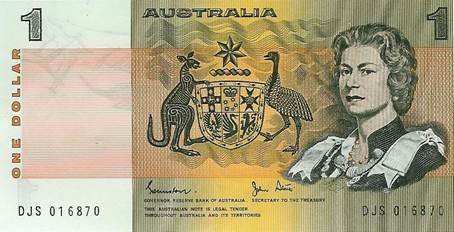 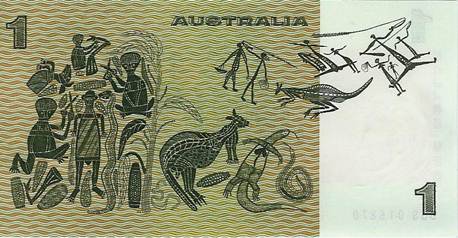