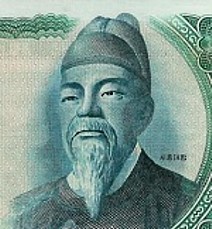 King Sejong the Great was born on May 6th, 1397, the son of King Taejong, who had achieved the crown through a series of coups and assassinations, including his half brother King Jeong Dojeon. Taejong established the Joseon dynasty, a more stable environment which eliminated private armies held by nobles, created a central government, and promoted education among the people.

At the age of 12, Sejong became a crown prince and married Lady Shim, who would give him 10 sons and 2 daughters. Unlike his father, Sejong did not come to power through violence. His two older brothers Yangyeong and Hyoryeong did not want the throne and, realizing that Sejong would make a good king, they conspired to make it so. Yangyeong and Hyoryeong became so unruly and acted out so badly that they were banned from the capitol and, deemed unfit, were removed from the line to the throne. Yangyeong lived his life traveling through the mountains while Hyangyeong became a Buddhist monk. Late in 1418, King Taejong abdicated the throne and Sejong became king at age 21.

King Sejong soon proved that his older brothers’ hunches correct. Japanese pirates, controlled by the So clan, had long plagued the waters along the Korean coast, and in June of 1419, with his fathers help in military planning, King Sejong authorized the invasion of the Japanese Pirate stronghold, Tushima Island in the Korean Straight.  Setting out with 227 ships and 17,285 soldiers, the invasion fought for less than one month before a cease fire was asked for by the Japanese Pirates. The So clan formally surrendered in September 1419 and, subject to the So clan’s efforts to control of other pirate attacks in Korean waters, they were granted trade with three Korean ports. In 1443, the So clan was awarded with a monopoly for trade with Korea under the Treaty of Gyehae.

But the Japanese pirates weren’t his only problem. Additional military outposts were established to control the Chinese nomadic peoples to the north. Military weaponry was encouraged, and new mortars and incendiary arrows were developed. With these new advances and military bases, Sejong was able to send military forces northward and fought back Manchurian forces and restored Korean territories that were lost in earlier battles before his reign.

Sejong was an advocate for promoting the physical well being of his country, and in 1433 the book “Hyang-yak chipsongbang”, a collection of native remedies, was published in conjunction with a large manual on traditional Chinese medicine.

He also encouraged advancement in science and culture. Under his reign many technological developments were made including an astrolabe, water clocks, rain gauges, sundials, and a new Korean calendar based on astronomical observations made in the capitol city, Seoul.

In an effort to establish a larger literate populace, King Sejong helped to devise the Korean alphabet, called Hangul as a way for the common people to express their language in writing. The upper classes of Korean society were educated in writing a modified Chinese alphabet which was quite complex. Hangul, with only 28 characters, was easier to learn and the people took to it readily, increasing the literacy rate dramatically. “Yongbieocheonga” or (Songs of the Dragons Flying to Heaven) and was the first work written in Hangul, and was a work recognizing the Joseon Dynasty. For the time being, Chinese continued to be the official language, but the Korean Hangul became the language of the people and helped to develop a uniquely Korean culture.

Wanting to establish a stronger and more sustainable agricultural process, which would help to eliminate periods of hunger, Sejong sent out teams of people to annotate various farming techniques practiced throughout Korea. The result was a compilation of a book in 1429 called “Nongsa Chiksol” (Talk on Farming), which detailed the best farming practices available. These books were distributed to Korean farmers and helped the country to establish a cohesive agriculture system. He also is responsible for creating a sliding tax table, allowing the farmers to pay taxes according to the economic trends and poor agricultural yields.

King Sejong the great died in 1450 after ruling Korea for 32 years. He is buried in the Yeong Mausoleum in Yeoju, South Korea. He is one of only two leaders who have been honored with the title “Great”. He is depicted on several banknotes, including this 100 Won note from 1965.