Henry Dawkins left England and came to America in 1754. He trained as an engraver, and made a decent income creating bookplates, maps, music, etc., for various printers. Unfortunately he was not one for staying out of trouble, and often found himself in jail.

Dawkins, along with two other men, Israel and Isaac Youngs got together in the home of the Youngs in Long Island, New York in the spring of 1776. Mr. Dawkins had just recently been released from jail on an unknown charge, and had asked the brothers to assist in purchasing a printing press. This was not altogether odd, as Dawkins was an accomplished engraver, and had worked as one for some time with printers. So, together the brothers Youngs and Dawkins, set up a printing press in the attic of the home, complete with a concealed doorway into the room, obscuring it from any passersby. The printing press was obviously not set up for printing newspapers, bookplates, or anything legal; they were setting up a counterfeiting operation.

The printing and engraving of notes in these first years was done easily enough by a skilled craftsman such as Dawkins, but he needed one item he couldn’t produce himself: Paper. Banknote paper was of a higher quality with embedded fibers, and Dawkins was not an expert in this area. Thus enters Isaac Ketchum. Ketchum was tasked to purchase paper of the quality used to print banknotes. He ventured into Philadelphia, Pennsylvania, which was at the time the paper industry capital in the colonies. Ordinarily Mr. Ketchum’s inquiries into the availability and cost of such papers would have aroused little to no suspicion. But by May 1776, the times had changed, and suspicions ran high. A vendor reported his inquiries and Ketchum was arrested in May, 1776. Perhaps it had something to do with Dawkins himself getting drunk about the same time as Ketchum was in Philadelphia, and bragging about his plans that set the whole scheme to come to an abrupt end. But at any rate, the whole gang, Dawkins, Ketchum and the brothers Youngs were all arrested and placed into jail on charges of counterfeiting.

Dawkins, a frequent guest in jails, probably settled down for a long visit among old friends. The Youngs brothers also met kindred spirits in jail, fellow Tories, and they shared many stories. But Ketchum was not so comfortable with incarceration, and especially not amongst the loyalists recruiting inside the jail. He listened carefully and then, in June 1776, he petitioned the Provincial Congress to hear not just his repentant story, but to listen carefully of Tory plots against the colonists. Ketchum revealed that there was scheme to kidnap General George Washington at his command post. Another plot was schemed to create an uprising of Tories behind the lines of the continental forces in conjunction with General Howe’s planned frontal assault on the continental army. For the sum of one dollar, these Tory recruits were to create havoc amongst the land behind the lines, by setting fire to powder stores and military supplies, and to steal any weapons they could lay their hands on. But Ketchum was not released yet. He was sent back to jail to learn more, and to get specific details of the plans.

Ketchum found out that Thomas Hickey, an ex-sergeant of General Washington’s personal bodyguard, and Michael Lynch, an ex-private, also of Washington’s bodyguard, were the two who planned to kidnap, and even had plans to kill, George Washington.

As it happened, there was a concurrent leak of information along the same subject. William Leary, a business man in New York, had heard that an employee of his, James Mason, was a Tory paid by the British to be a part of the uprising. William Leary, a proud patriot, had James Mason arrested on charges of treason. Mason quickly saw that he was in trouble and named others in the plot: Two additional members of Washington’s bodyguard, William Green and James Johnson. Two others were named as well: Gilbert Forbes, a gunsmith, and Thomas Hickey, currently in the city jail, spilling the beans to Isaac Ketchum. Arresting these subversives, revealed more conspirators, and in all, 20 Tories were arrested, including the Mayor of New York City, David Matthews. The plot having been found out, and key members arrested, those remaining were never heard from, and the risk of the plot was removed. Isaac Ketchum testified at the trial of Thomas Hickey, which resulted in his hanging on July 28, 1776. Isaac Ketchum received a full pardon.

While certainly a scoundrel, Henry Dawkins’s counterfeiting scheme, albeit inadvertently, saved the American Forces from devastation. While little is said of his personal assistance with the revelation of the Tory plot, it is apparent that he received a pardon. On October 13, 1780 Henry Dawkins received a warrant for $1,500.00 to “Engrave and alter the border and back pieces for striking the Bills of Credit of the United States”, which resulted in the note below. Henry Dawkins, the first, and only, known would–be counterfeiter, who was later authorized to legitimately engrave banknote plates, passed away in 1786. His surviving copper engraving plates subsequently sold off. 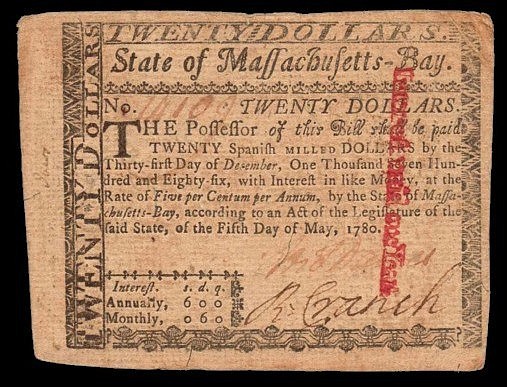 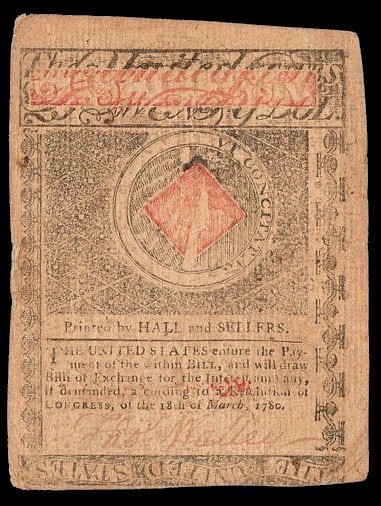