Jurij Bartolomej Vega was born on March 23, 1754 In Zagorica, near Ljubljana, Slovenia. His father, Jernej Veha was a farmer, and died in 1760 when Jurij was only six years old. One of six children, he was an intelligent child, who loved to read and study. He left Zagorica at age 13 to attend the Jesuit school in Ljubljana, where his studies centered on languages, including the classics of German, Latin and Greek, as well as science, mathematics and geography. At the age of 19 he completed his primary school. Due to Pope Clement XIV disbanding the Jesuit order, the school was closed and Jurij continued his education at the state run secondary school where he received training in physics and in mechanical and hydraulic engineering. When he graduated, Jurij accepted a position as a navigational engineer, working on several rivers in Slovenia and Austria for the next five years. He spent this time on the rivers continuing to learn about physics and mathematics. Around this time, when he was in his 20s, he began using the German version of his name Georg Freiherr von Vega.

Jurij Vega left his position as a navigational engineer and entered the Austrian military in April 1780 in an artillery unit. Only seven months later he had proven his abilities and was assigned to the military’s artillery school in Vienna, Austria. While there, he wrote a four volume set of his lectures titled “Lectures on Mathematics”. While writing these volumes, he also wrote and published another work titled “Logarithms, trigonometry and etc. for the use of mathematic formulas and tables, illustrated”, intended to be an affordable yet accurate workbook. He was so confident of the accuracy in this work that he promised a gold ducat for each error that could be found.

1787 was a big year for Vega. Now aged 33, he was promoted to full lieutenant and appointed as a professor, and he published another book, “Practical instructions on bomb-throwing”. This same year he married Josefa Swoboda, the daughter of a Czech noble. Meanwhile, Austria signed a military pact with Russia, and soon after, the Turks declared war on Russia, and attacked Austria in 1788. Vega volunteered to be assigned to combat service, where he could place his theories into practical use.

Placed in charge of a unit of heavy mortars, Vega’s first action was seen in an attack on Belgrade. The three weeks of fighting were intense, but Vega sat calmly and calculated the trajectories for his mortar unit. His ability to precisely place artillery was instrumental in the Austrians achieving victory over the Turks in this battle. During his time in the field, Vega continued his mathematical innovation, developing an algorithm which helped him to calculate π (Pi) out to 140 places. This calculation was not exceeded for another 50 years. The war lasted for three years, ending with the signing of the Sistova Treaty in 1791. Vega then returned to Vienna and continued his post at the military school. Jurij and Josefa Vega had a son, Henrik later that year. In April 1792, France declared war on Austria in what would become known as the war of the First Coalition. This was an effort of European countries trying to stop France, who had recently disposed of their monarchy, from spreading revolutionary ideas beyond its borders. Vega again served in the field, but retuned periodically to work in Vienna. He was promoted to the rank of Major in 1793, and in the same year he and his wife Josefa had a daughter, Maria Tereza. During his time back in Vienna, he published more works, including the “Handbook of Logarithmic Trigonometry”.

In 1794 he published his monumental work “Thesaurus Logarithmorum Completus”, a large table of logarithms, and also travelled to Stutgart, Germany, where he was inducted into the Royal Society of Sciences and Humanities.

Vega continued to serve in the war, taking place in many battles, and improving the artillery methods then in use. In February 1796 he and Josefa had another son, named Franc, and three months later, Vega was presented with a medal, the Knights Cross of the Order of Maria Theresa, the most prestigious honor in the Austrian military. The war continued until October 1797, when Vega again returned to Vienna where he continued to publish several mathematical works, including his “Essay on the revelation of the mystery in the familiar theory of universal gravitation”.

Then tragedy struck Jurij Vega. In July 1800 his wife, Josefa passed away, followed only two weeks later by his daughter, Maria Tereza. The following month, in late August 1800, Jurij Vega was awarded the title of Baron.

Newly titled Baron, Vega continued to serve in the military and in 1802 was promoted to Lieutenant Colonel. In September of that year, he was reported as missing and a search for him found his body 9 days later on September 26, 1802 in the Danube River. An inquiry was made, and the ruling was death by accident. There is some suspicion that his grief over his wife’s and daughter’s death led him to suicide.

Baron Jurij Vega has had honors bestowed on him post humorously. He has had the asteroid 14966 Jurivega named after him, a street in Vienna, Austria and the Lunar Crater Vega has also been named in his honor. He has also been commemorated on stamps, coins and banknotes, including this 50 Tolar banknote issued in 1992.

The birthplace of Jurij Vega is still belongs to his descendants, and is made into a museum, where an exhibition of his life and works are on display. 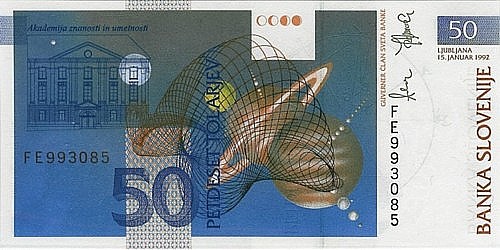