Johan Anthoniszoon “Jan” Van Riebeeck was born in April 1619 in Culemborg, Netherlands. He grew up in the city of Schiedam, famous for its windmills and gin. It was in Schiedam that he met and married his wife Maria de la Quellerie. They had eight children. In 1639 Van Riebeeck joined the Vereenigde Oost Indische Compagnie (VOC), known as the Dutch East India Company, and served as an assistant surgeon in the East Indies. The VOC was the world’s first multinational corporation, and it carried governmental powers which included the ability to establish and maintain colonies by maintaining military forces, wage war, enforce its own laws, establish monetary policies overseas, negotiate treaties, and etc.

His time with the VOC took him to various locales in the East. When he was found to be doing some personal trading on the side, he was returned to The Netherlands. Despite this lapse in conduct, in 1651 he was ordered to establish and command the settlement in the southern portion of Africa at Table Bay after the British had abandoned their desire to have a presence in the area. The VOC recognized the importance of the area at Table Bay because of its supply of fresh water, which was scarce in the region. There was no initial intention to establish a colony, but merely to build a fort which could be used to defend the supply station between The Netherlands and the East Indies. A way station was needed for the ships to stock up on foodstuffs, make repairs to ships, and to help cure sickly sailors, especially those who were suffering from scurvy. In April 1652 Jan Van Riebeeck, along with his wife, 82 men and 7 women,  established what is now the city of Cape Town. There Riebeeck oversaw the building of the mud and wood fort known as Redoubt Duijnhoop very near where the middle of Adderley Street in Cape Town is today. In addition to defense of the supply station, Jan Van Riebeeck erected a flagpole to use for signaling passing ships, and his men built and maintained pilot boats to escort the ships into the harbor.

While serving in South Africa, Van Riebeeck accomplished many things including the planting of gardens and establishing trade with the local Khoikhoi people who raised herds of cattle. These would be used not only for supply of the fort, but to supply the ships passing back and forth on their trade route. An almond bush that was planted during this time is still alive and cared for in a botanical garden that exists on the same spot as the original fort. The gardens soon became farms, which pushed the Khoikhoi people further from the area, and created tensions, and resulted in a few battles.

Though he likely was not the discoverer, Van Riebeeck is still credited with the reporting of a comet, C/1652 Y1, the first ever such discovery in South Africa.

Van Riebeeck served as commander of the fort for ten years until 1662, when he was promoted to Secretary to the Governor General of the VOC,  which would take him to the island of Java. En route, his wife died in November 1664 in Malaysia. Van Riebeeck continued on to Java where he served in the VOC until his death in 1667. He never returned to South Africa, or The Netherlands.

Jan Van Riebeeck was depicted on South African Currency from 1948 until 1992 when political changes in the country have resulted in the removal of his image from all currency and stamps. The South African Currency now prominently depicts animals indigenous to the country. There is some dispute over whether the portrait used on the banknotes and stamps was actually Van Riebeeck or not. There is some evidence that it may actually be the portrait of Cornelius Vermuyden, a Dutch engineer who developed land reclamation methods and brought the procedures to England.

Redoubt Duijnhoop did not last, and was rebuilt many years after Van Riebeeck left for Java. It was replaced by a brick and mortar fort which still stands today, known as the Castle of Good Hope.

During his command of the fort, he banished Autshumato, a native interpreter, to Robben Island out in Table Bay. This island became a popular prison in which even Nelson Mandela was incarcerated. In 1994 Van Riebeecks , or Founders, Day was abolished. 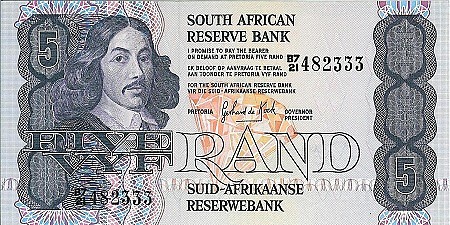 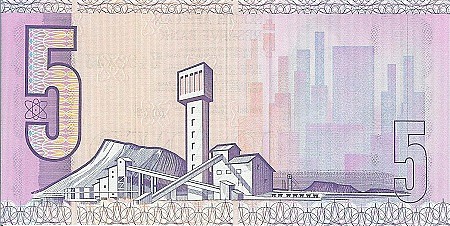