Also known as The Astronomer and The Learned, Alfonso X ruled Spain from 1252 until 1284, when he died in Seville.

He was well known among the scientific community as a proponent of astronomy and cosmology based on Ptolemy’s studies. He learned the cosmological sciences of Ptolemy from Arabs; The Alphonsus Crater of the moon is named after Alfonso X as a result. He also prepared the Alfonsine tables, which are astronomical tables that corrected errors in the Toledo Tables, and were in use until the 16th century. Alfonso X has had some famous quotes attributed to him, the most famous was when he learned of Ptolemy’s theory of astronomy, he said “If the Lord Almighty had consulted me before embarking upon Creation, I should have recommended something simpler.”

By Alfonso X’s time, Spain had for some time been a popular place for European scholars to go and study. As a result, translations of texts from all over were being accomplished; the texts being translated were primarily of Arabic origin, focusing on mathematics, astronomy and the Koran, though there were a number of ancient Greek texts that were translated as well. Alfonso X continued this project as well as furthering the production of original Spanish scholarly texts as well. This helped to further the knowledge of the ancients into not only Spain, but to the rest of Europe too. Alfonso X also sponsored the translation of the Jewish Talmud.

Alfonso X welcomed the influences of Christian, Jews and Muslims into his kingdom. He also was a proponent of art and music as well as science. Alfonso X helped to write several Cantigas, or monophonic songs. His collection of 400 Galician songs about the Virgin Mary is considered to be one of his most enduring cultural contributions. He also commissioned the Book of Games, with 98 pages with color drawings depicting the games of the time including Chess, Backgammon, and various Dice games as well as others such as Triga, Hazard, Riffa, and other period games. It is said to be one of the first European works written in a local language, namely Castilian Spanish. Alfonso X’s father, Fernando III had promoted the usage of the Castilian Spanish language, Alfonso X promoted its widespread use throughout Spain, and after his death it evolved to become the modern language of Spanish.

Alfonso X also directed the writing of the Fuero Real, or the Real Law, which was a set of laws written in 1254 that established local laws within certain cities mainly for commerce, and was a way to remove the feudal rule and promote the seat of power to the crown. He also wrote the Seven Part Code that worked to establish uniform statutory rules throughout the kingdom. Based on Roman law, with discussions of morals and philosophy, this work is considered Spain’s greatest contribution to the history of law. Because of his contributions to Law, his relief portrait in among 23 other lawmakers in the US House of Representatives, along with Moses, Hammurabi, Maimonides, Thomas Jefferson and others.

In 1254, he was declared Rex Romanorum, or King of the Romans, a title which was bestowed upon him as an elected ruler of the Holy Roman Empire, a primarily Germanic group of lands in the middle ages. This was possible due to his lineage from the Hohenstaufen, a group of Germanic kings. Due to an election delay and a change of vote, he shared this title with Richard of Cornwall. It is said that Alfonso X bribed the electors to vote for him. When Richard of Cornwall died, Alfonso X went to France to make an appeal to the pope, but Pope Gregory X persuaded Alfonso X to renounce his claim. This difficulty led to a fixed congress of electors for the title of Holy Roman Emperor.

While in France making his appeal to the pope, Morocco and Granada invaded Castile. The King’s eldest son, Ferdinand, was killed in the battle. After Ferdinand’s death Alfonso X’s other son, Sancho, decided to try to make a claim as heir to the throne, despite the dons Ferdinand left behind. Sancho had the backing of the nobility and certain Castilian precedents in this case. Nevertheless, a Civil war broke out and Alfonso was forced to accept Sancho as heir. Sancho then declared himself Regent and rose up against his father. Alfonso was forced to retreat to Seville where he spent the rest of his days.

Alphonso X was depicted on the 5 Pesetas banknote issued in 1954. 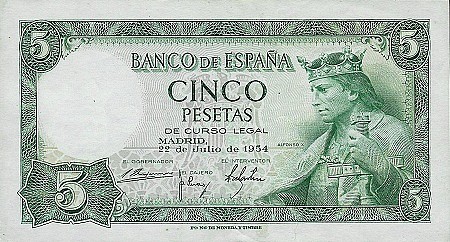 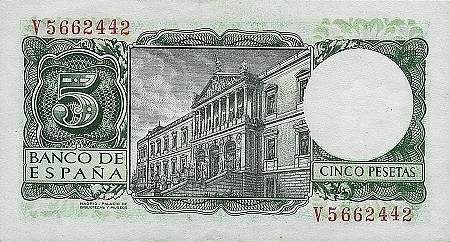