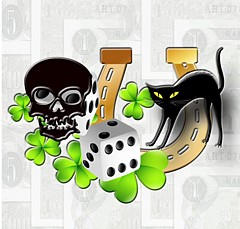 We all have our own superstitions about certain things. Some, like walking under a ladder, are more about common sense than anything else. Money is no exception of course, and here are a few of the more common ones found throughout the world.

Sayings:
The love of money is the root of all evil.

See a penny pick it up and all the day you’ll have good luck.

A fool and his money are soon parted.

If you see a small red spider, this is known as a money-spinner and it will bring you luck. To see a small spider crawl on you or on your clothes means that you will have good financial luck.

A brown spider in your home is an omen that money is heading your way.

There are different opinions as to the ‘itchy palm’ superstition. Some say the right receives and the left relieves, but others have it turned around.

I have also heard that if your right palm itches, it means that you will shake hands with a friend.

The Garnet will help you to achieve good luck in business, but beware – it will cause bad luck in romance.

To dream of being surrounded by pigs means that you will have someone asking you for money.

Cats bought with money will never be good mousers.

The Scottish say an occupant will come into money when rats enter the house.

The Japanese also have associated rats with money and good luck.

To see three white horses means that you will have someone pay you back an old debt that you had forgotten about.

To dream of a horseshoe is a sign that you will receive money.

To plague an enemy with ill fortune, drop a bent coin into something of theirs, like their pocket, or a bucket, etc. If they do not discover it and throw it away before the sun sets, then they will be so distraught with ill fortune that they will cease to pester you.

If you burn the skin of an onion, you will receive unexpected money.

This was a real coin that existed and was owned by a family named Turnbull in Northumberland, England. The Black Penny was ”Not quite as big as a modern penny, but thicker. It had a kind of raised rim or border, and seemed composed of copper or zinc.” This penny supposedly cured madness in cattle.  This was accomplished by dipping the coin into South running water. The water was then drawn off and given to the cattle to drink. This coin was loaned out quite often, and was eventually lost when being returned by mail around 1827.

Coins, usually pennies, were placed on the eyes, mouth or in the hands of the deceased.  Reasons for this include the ancient belief that they would help the deceased to pay Charon, the Ferryman, to cross the river Styx, so that they could proceed into Hades. Another reason for this was to keep the eyes from opening, as it was thought that if the eyes of the dead were open, they would be looking for someone to take along with them.

Evil spells plaguing you? To keep witch’s or fairy’s spells from stopping the cream from turning to butter, a silver coin thrown into the cream would suffice. Be sure to remove the coin afterwards!

The first gift made to a newborn is often a silver sixpence. It should be placed into the right hand, and this is not only done for good luck, but divination of their future money management can be ascertained from the child’s actions: If held tightly, the child will save money  – or be a miser; If held loosely, the child will be generous; if dropped, the child will be a spendthrift.

When putting on clothes for the first time, a coin should be placed into the pockets, if there are any. This will ensure plenty of money while wearing the clothing in the future.

In some cultures it is customary to pin ‘lucky money’ to a brides wedding dress.

If you iron the hem of your husband’s shirt, you iron away his money.

When gifting a wallet, you should always place some money in it to ensure that the recipient will never be without money.

To cure an epileptic, take nail clippings from the sufferer’s hands and feet and bind them with hemp and then wrap them with a silver sixpence in a paper that has the Names of the Holy Trinity. Then tie this package under the wing of a black rooster and bury the poor bird in a hole in the ground.

To cure the evil eye, you should drink, in the name of the Holy Trinity, water which has been drawn with a wooden ladle from a running stream, and which has had silver and gold coins dropped into it.

When given as gifts, these are thought to sever love or friendship. To avoid this, the recipient should give something in exchange for the gift, and this is typically a small coin.

I have also heard of keeping a penny with a set of knives to keep them from cutting you.

In Britain it is thought that for good luck, when the moon is first seen, you should turn over silver in the pocket. In Scotland, a ‘Lucky Penny’ was carried and turned over three times when the moon appeared. To be without money when seeing a new moon is considered unlucky, but if a man has some and turns it over without taking it out of his pocket, he will have plenty of money during the coming month, and the wish he makes while turning the coins will be fulfilled.

If you hold up a coin to a new moon and wish for money in the coming month, as the moon “increases” in size, so too will your money

A variant is:
To always have money in your pocket, keep in your purse a coin with a hole in it. At every new moon, take it out, spit on it and return it to your pocket and wish yourself good luck.

Coins with holes are generally considered to be lucky.

A pot of gold is at the end of a rainbow. This is usually associated with Ireland and the Leprechaun’s pot of gold hidden there.

While playing cards (especially whist), it is considered good luck to have a coin with the date of your birth on you.

Money offered at Holy Communion. Once believed to have curative powers due to its association with the sacred rite, and used to cure various ailments.

To bring about the cure, 12 or 30 pennies would be collected (in some instances, the patient, while in other instances, their friends) by begging for them from widows or unmarried people of the opposite sex. These coins would then be presented to the clergy in exchange for a shilling or a half crown from the communion offering. The coin so obtained was then made into a ring or worn about the neck.

For good luck, place a gold coin at the base of the mast and another in the bedding of the keel.

I have also heard of placing a silver coin at the base of the mast.

When putting out nets, cut a slice in a cork attached to the nets and place a coin in the slot. This informs Neptune that you are ready to pay for the fish you catch.

If you should drop money, let someone else pick it up and hand it to you – then money will come to you.

If you drop money, you should also recite: “Money on the floor, money at the door”.

Pick up a coin off the floor only after you have walked on it.

It is ill luck to find money – it is recommended that you spend it.

Finding money in unexpected places is fortunate as long as you do not reveal it and do not let anyone know you have found it.

It is said that finding a coin ‘heads-up” is lucky, but there are conflicting opinions on whether a ‘heads down’ coin is unlucky or not.

Some people from Trinidad advise never to pick up any money you find in the road, as it has “money worries” on it.

When a bride is walking down the aisle, a coin in the shoe, or in the stocking, will ensure prosperity.

If you catch the first bee of spring you see and keep it, you will never be broke.

A bee landing on someone’s hand is believed to foretell money to come.

Eating a goose on Michaelmas Day will ensure you will not be wanting for money for a year.

To ensure that you have money in your purse, you should place three leaves each of blackberry, bergamot, and bistort inside it.

Paying, loaning or lending on New Years Day is considered ill luck, as it portends that you will be doing so all the rest of the year. Plenty of money should be placed in every wallet in the place to guarantee a prosperous year.

Two Dollar bills are considered to be unlucky.

It is considered to be unlucky to be paid with an English Crown (5 shilling coin).

Of course we are all aware of wishing wells, where throwing a coin into a well or a fountain grants a wish.

An old charm for money is to go out to a holly bush on a rainy day and clasp it round the main stem and chant three times, “Holly tree, 0 holly tree, let much wealth come to me.”