William Meredith was born in Philadelphia, Pennsylvania in 1799 to William and Gertrude Meredith. He was a nephew of Gouverneur Morris, who contributed greatly to the US Constitution as well as authoring the preamble. William Morris was perhaps born into politics given his heritage, from his Uncle and his father, who was a prominent lawyer at the time. After graduating from the Pennsylvania University and getting his masters degree in 1816 he was admitted to the bar in 1817, at only 18 years of age. He was later married to Catherine Kepple.

William Morris was a member of the Pennsylvania General Assembly, which is Pennsylvania’s state legislature, for four years from 1824 – 1828. He also served as the Philadelphia City Council President for five years beginning in 1834 and ending in 1849. During this time he was also appointed the US Attorney for the Eastern District of Pennsylvania in 1841, which is one of the original 13 courts authorized by the Judiciary Act of 1789. He was also a member of the 1837-1838 session of the State Constitutional Convention, in which he voted in favor of granting elective franchise (the right to vote) to African Americans. He made an unsuccessful attempt to run for the US Senate in 1845.

As a masterful attorney, he was able to assist the Schuylkill Navigation Company in winning a lawsuit. This one suit ensured him a large and successful practice throughout his life.

In 1849, US President Zachary Taylor was looking for a cabinet member from Pennsylvania, choosing William Meredith in part because he was also a member of the Whigs, a political party from 1833-1856. As a result, Meredith was appointed by President Taylor to be the 19th Secretary of the US Treasury in 1849. That year, Meredith published the Annual Report of 1849 in which he laid out his reasons to adopt a protective tariff, which artificially increases the costs of imports and thus protect domestic businesses from overseas competition. Even though he gave an eloquent argument, there was no action taken to instill such a tariff during Meredith’s term as Treasury Secretary.

After threatening southern secessionists with hanging should they rebel against the Union, President Taylor fell ill, some suspect poisoning, and died after a five day illness. Upon his death, Meredith, along with the rest of the Presidential Cabinet, resigned their positions. In 1851, he was a candidate for the Pennsylvania Supreme court Judge, but lost to Walter Lowrie. Meredith later served for two terms as the Pennsylvania Attorney General during 1861 – 1867.

In 1870, Meredith was a appointed by President Grant as a member of the Geneva Tribunal for the arbitration of the Alabama Claims, which were US claims for damages by the United Kingdom during the Civil War, violating it’s neutrality when it aided the Confederacy by building a warship (The CSS Alabama) which caused considerable damage to the US Merchant and Naval forces.

In 1872 he was unanimously elected the president of the Philadelphia Constitutional Convention.

William Morris Meredith died in Pennsylvania on August 17, 1873. He is shown here on a Ten-Cent Fractional Currency Note issued from 1874 through 1876. 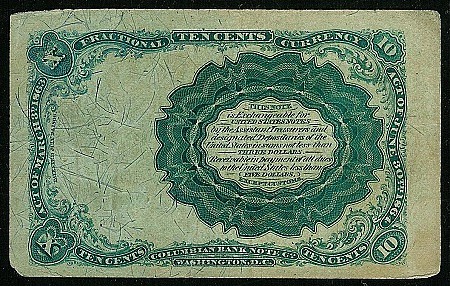