When the United States of America was engaged in its civil war, metal of all types was needed for the war effort. When the banks stopped redemption of paper money for coinage, the public, realizing that the gold, silver and copper coins were intrinsically worth more than paper money, began to horde their coins. This created a severe shortage of coinage in the Northern states and a solution was needed. The public had provided the necessary clues to this solution when they began using stamps as a form of revenue in lieu of coins. While this solution was not ‘legal tender’ it was accepted by the majority of the public and businesses.

The U.S. Postal Service was not so fond of the situation, though. They were not able to exchange soiled or damaged stamps for newer ones, and they didn’t wish to continue printing stamps en-mass to replace coins. So the then secretary of the U.S. Treasury, Salmon P. Chase, proposed that there should be printed a new Postage Stamp Currency for use in paying debts under five dollars. In July of 1862, Congress passed a Currency Act and in August of 1862, denominations of 5, 10, 25 and 50 cents were issued and were known as Postage Currency.

This new Postage Currency was serving the public fine, but there soon became an issue with counterfeiting these notes. So in 1863 Salmon P. Chase asked for a new series of notes to be printed which were harder to counterfeit. These new notes were renamed Fractional Currency and incorporated more intricate designs and other counterfeiting precautions such as imbedded fibers and metal foil overprints.

They were used as small change as we use coins now, but to be redeemed for larger value banknotes you had to save a minimum of $3 worth (30 of these little notes). To pay dues to the U.S., (taxes, etc) they had to be in amounts less than $5. So it is evident that the banks didn’t want to deal with small amounts of these as it very likely wasn’t worth their while to mess with such small sums. For the Tax Collectors, or whoever collected “dues to the United States”, the notes were obviously too troublesome to deal with, and they had to be limited to less than 50 notes per transaction. Fractional currency was in use until 1876 when their use was discontinued. 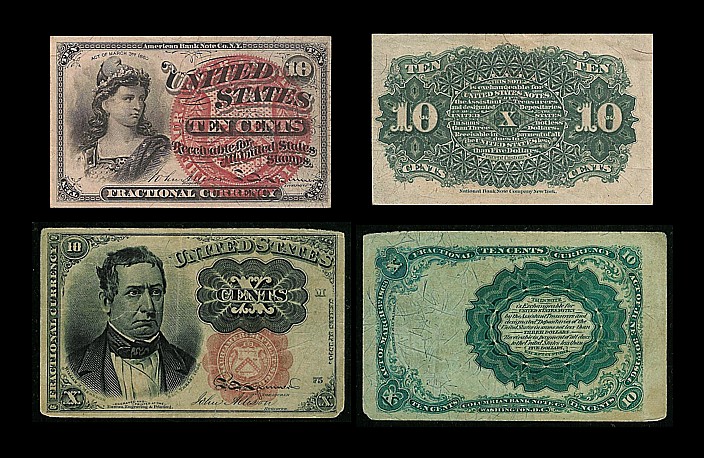