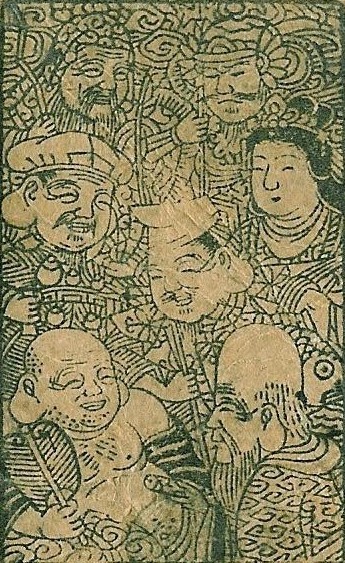 Welcome to the world of Japanese Hansatsu!

These fascinating banknotes are from a long ago era, when things were not at all as they are today. Through the Hansatsu notes you can glimpse into the past of an exotic land that was just coming out of its seclusion. Strange denominations and ancient deities often make their showing, but only the ardent student of Japanese culture would ever be able to fully decipher the many things hidden in plain sight on these remarkable notes. Still, we take a peak into the hidden meanings of Hansatsu.

Want to know how to find dates on Hansatsu? Click Here

Want to know more about the people on Hansatsu? Click Here

One of the neatest collectible currencies in the world is Japanese Hansatsu. These banknotes were issued during the Edo Period (1603-1868), but there are similar designs issued before the Edo period and after the Edo period, during the Meiji Restoration, which restored Imperial Rule to Japan.

During the period of Japanese history from 1185-1603, Japan was ruled by the Emperor, but his power was not absolute. In reality, Japan was actually controlled by powerful Daimyo, (feudal lords) and Shoguns (warlords). This period has been divided up into separate periods of rule based on who was in control at the time.

After winning the Battle of Sekigahara in 1600, Tokugawa Ieyasu became the supreme ruler over Japan. He organized all the Daimyo’s into around 300 Han, a type of fief, or domain, from which he demanded loyalty. Those who were his enemies had their houses destroyed and their lands taken. Those who were loyal, he granted powerful positions to in the Han’s.

The Han’s were able to produce what were called Han-Satsu, a type of banknote similar to notes issued previously by private issuers, but had since been removed from circulation. Hansatsu were issued in the different han’s and they circulated primarily within the han they were issued in, though there were a few exceptions. Hansatsu were based on the gold, silver and copper coinage of the time, but there were a few that that were to be exchanged for commodities such as rice and fish. In 1707 the controlling Tokugawa Shogunate banned the use of paper money, due to abuses of the system. However, in 1730, the practice of issuing Hansatsu was officially resumed.

When Tokugawa Yoshinobu resigned in 1867, the result was the Boshin War in January of 1868, in which the Shogunates forces were defeated and the Emperor declared himself to be restored to power. This period is known as the Meiji Restoration. At this time the government began an exchange program for people to turn in their Hansatsu for the new national currency called the Dajoukansatsu, which was the first banknote issued by a central government in Japan. This was met with reluctance, however, and the exchange ran until 1879.

Hansatsu notes are vertically printed and narrow, which has garnered them the nickname of ‘Bookmark Notes’ by some collectors. The notes have many different designs and motifs, and are usually filled with the Japanese Kanji script both in printed and handwritten form. One of the more prevalent design features is that of a corpulent man standing on two barrel shaped rice bales, and carrying an oversized sack over his shoulder. These depictions are of the Daikokuten, one of the Shichi Fukujin, or the Seven Gods of Fortune. Originating from the Buddhist faith in India, where he was known as Mahakala and was a fierce warrior god. Towards the end of the fifth century, he was ensconced in Buddhism, and he made his way to Japan by the eighth century where, over time, he lost his fierce ways and became a chubby, happy man. Renamed Daikokuten, he adopted a magic mallet, a large treasure sack, bales of rice, and became the god of wealth, happiness, farming, and of course, good fortune. He rapidly grew into a favorite deity throughout Japan.

His association with agriculture has him depicted almost always standing or sitting on two rice bales. This has also made him a favorite deity for cooks and kitchens. Tradition also has it that the main pole in a house is often called the Daikokuten pole, meant to support the house with good fortune.

The oversized sack of treasure has in it three items, in abundance: Wealth, Wisdom and Patience.

The magical wooden mallet is said to be able to grant whatever wish you want when it is struck on the ground, and when shaken, coins will magically appear to fall out of it. The mallet contains a wish granting jewel, called the Hoju, that is a special symbol of power in Buddhism. The Hoju is said to be able to grant wishes, bring calm, and give understanding of the Dharma, or Buddhist law. The Dharma is also considered to be wealth in Buddhist teachings. The jewel has also been said to contain the sacred ashes of the Buddha himself. The mallet can also be seen with three jewels in a flame, or a single pointed flame.  The three jewels and flame are, along with rice, powerful fertility symbol. On Hansatsu notes, these jewels can most often be seen on the ends of the rice bales.

Daikokuten is sometimes depicted with three heads, and is then known as the Sanmen Daikoku, which is depicted to show him as the protector of the three Buddhist “Treasures”: Buddha himself, Law and Buddhist disciples. This depiction of him was quite popular during the Edo Period in Japan.

Though faded, the back of this note shows Jurojin, one of the Shichifukujin and the god of wisdom and longevity. Its denomination was good for 3 Bu worth of beans, a type of commodity note.

This note features Benzaiten, one of the Shichifukujin, or 7 lucky gods. The only female of the group, she was often portrayed playing the Biwa, a stringed instrument similar to a lute in appearance.

Benten is the goddess of the arts, geishas, composers, designers, painters, sword makers and even gamblers. Benten is also an agricultural goddess who is called upon for rain and abundant harvests.

After the Han system of governance was ended in 1871, several areas were reorganized and this included the merging of prefectures, districts, towns and villages. Included in the merges going on were Chita District and Mukawa Districts becoming Nukata Prefecture.

Then in April,1872 Nagoya Prefecture had a name change to Aichi Prefecture. It is said that Aichi was named after a poem by Takechi Kurohito in his 3rd volume of “A Collection of 10,000 Leaves” or “Man-yoshu”:

The cry of a crane

Hearing the cry of the crane.

(The name Ayuchi is an older spelling of Aichi)

The next two Hansatsu were issued in Aichi prefecture, Chita city, Kami-Nomura Village. There is no date, but given the naming convention, it must be 1872 or later.

The back of this note has three Hoju (Wish Granting Jewels) – compare to the note above.

This note from the Goshu Province depicts Jurojin with a deer and a staff. He is one of the 7 Lucky Gods, and he represents longevity.

Exchanged by Hirano-Ya Tatsunosuke.  Paper watermarked at top. This note debpicts a rare style of vignette for hansatsu: sun, moon, and stars vignette at the top front. The back features a horse at the top.

The note above features one of the Shichifukujin on the front: Fukurokuju, the god of Happiness (fuku), Riches (roku) and Longevity (ju). Sometimes confused with Jurogin because one of the associated animals is a deer, he is more readily distinguished by his elongated head, more than half his height, and often covered with a cloth or hood. Other animals which can accompany him are the snake, the stork and, in the bottom vignette, the tortoise.

The back of this note depicts a different god, Marishiten, with three heads, six arms and brandishing a variety of weapons while riding atop of a boar. The three heads and sets of arms is an indication that it is thought to be a combination of three gods/goddesses that were imported from India/China as Hinduism and Buddhism migrated to Japan.

Marishiten is not one of the Shichifukujin, but is a god of the Vajrayana sect of Buddhism and is a protector from evil, misfortune, theft, cures diseases and resolves arguments, among other things. In Japan this deity’s popularity was at it’s highest during the Edo period, but declined rapidly during the Meiji reform.

The gentleman catching a fish in this vignette is not Daikokuten, but is instead the ‘laughing god’ Ebisu, one of the Seven Gods of Fortune. According to legend, Ebisu gained ill favor with his elders at the age of three, and he was cast into the sea, who is always happy and laughing, and evidently very generous. He is depicted as always wearing traditional Japanese court clothing with a fishing rod and a fish known as a ‘red sea-bream’ (pagrus cardinalis), which is supposedly the most delicious fish that can be prepared. In some modern illustrations, he is also associated with jellyfish.

Ebisu is the patron of merchants and tradesmen, as well as fishermen. Perhaps due to his clothing, it is considered good luck to purchase clothing and material on Ebisu Day. 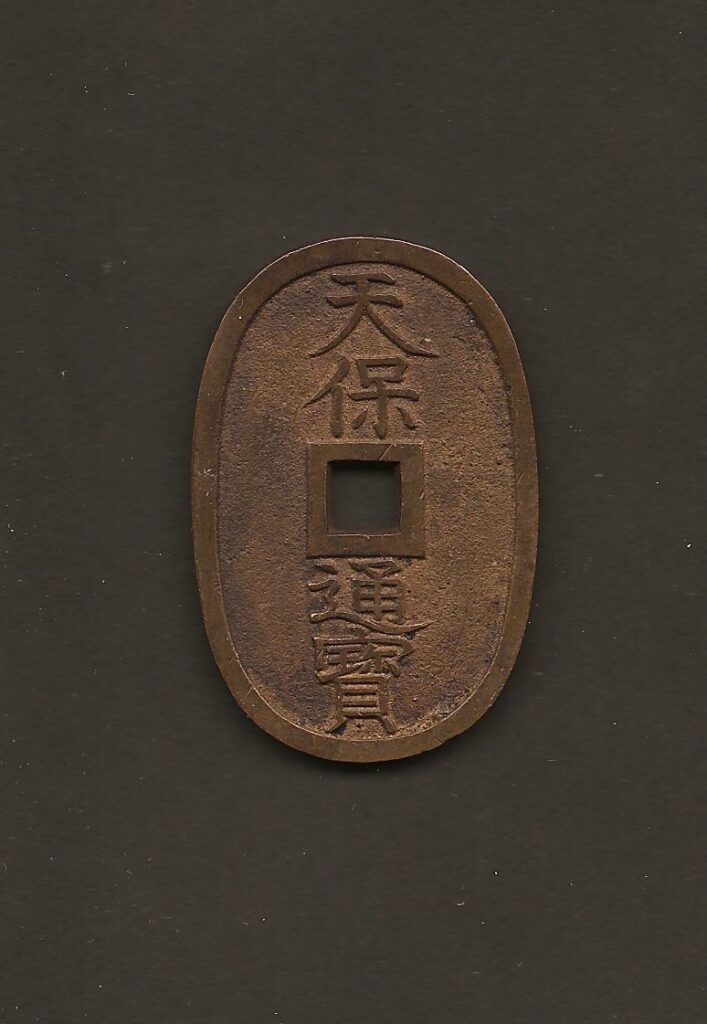 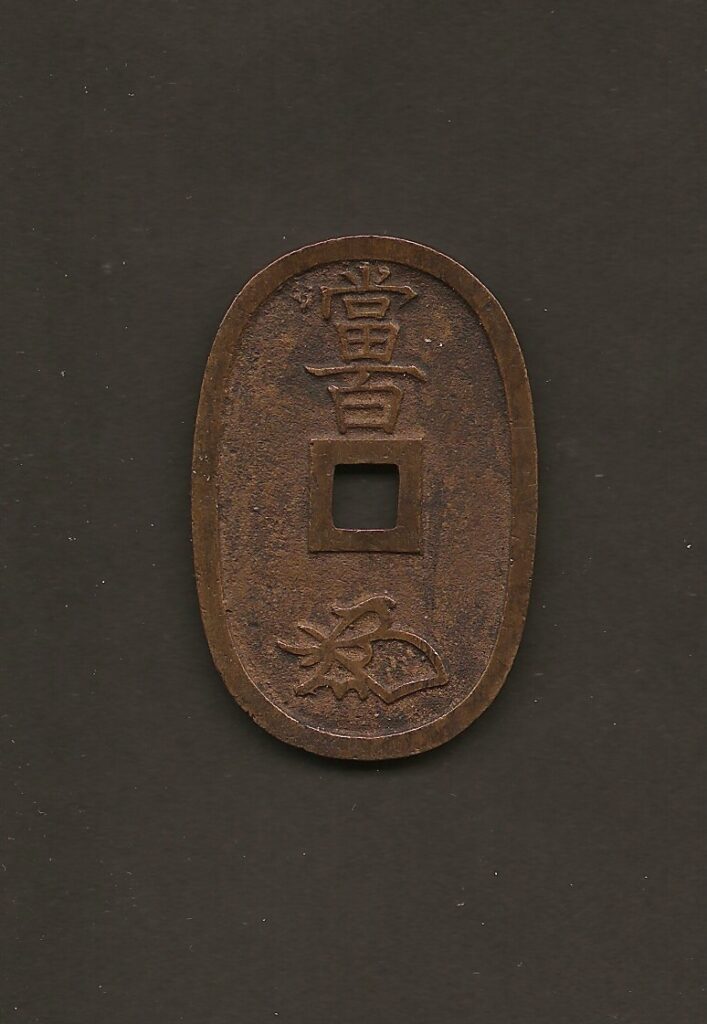 Towards the end, let’s look at what the coin equivalents would’ve been in the Hansatsu time frame.

It was contemporary with the Hansatsu notes issued during the later phases, but was issued by the Japanese Government and was accepted all over Japan without any of the discounting that would be incurred with a paper note issued by a local Han some distance away.

The reverse inscription reads: To Hyaku which means: Value is 100 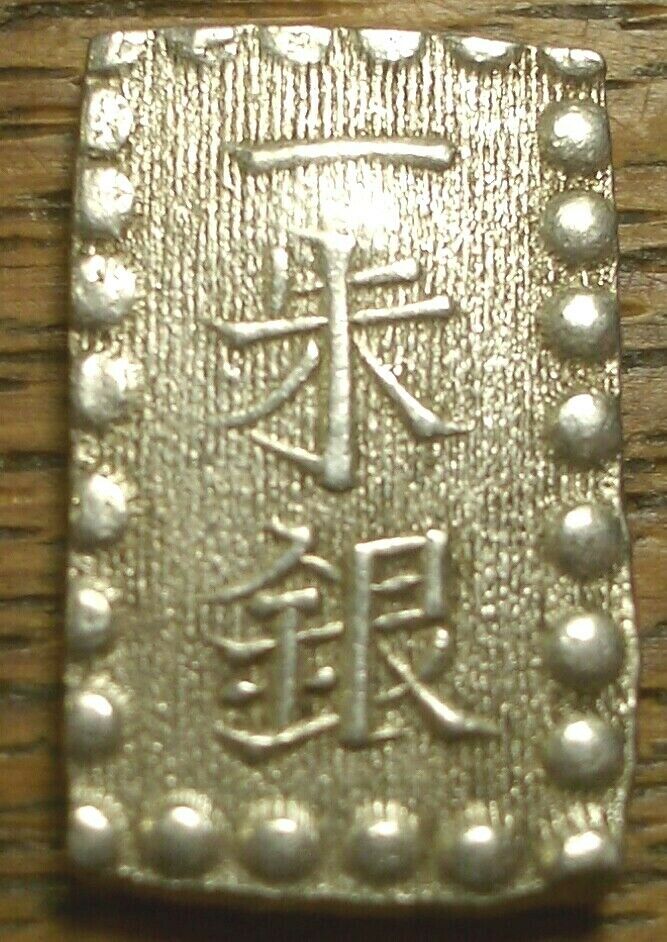 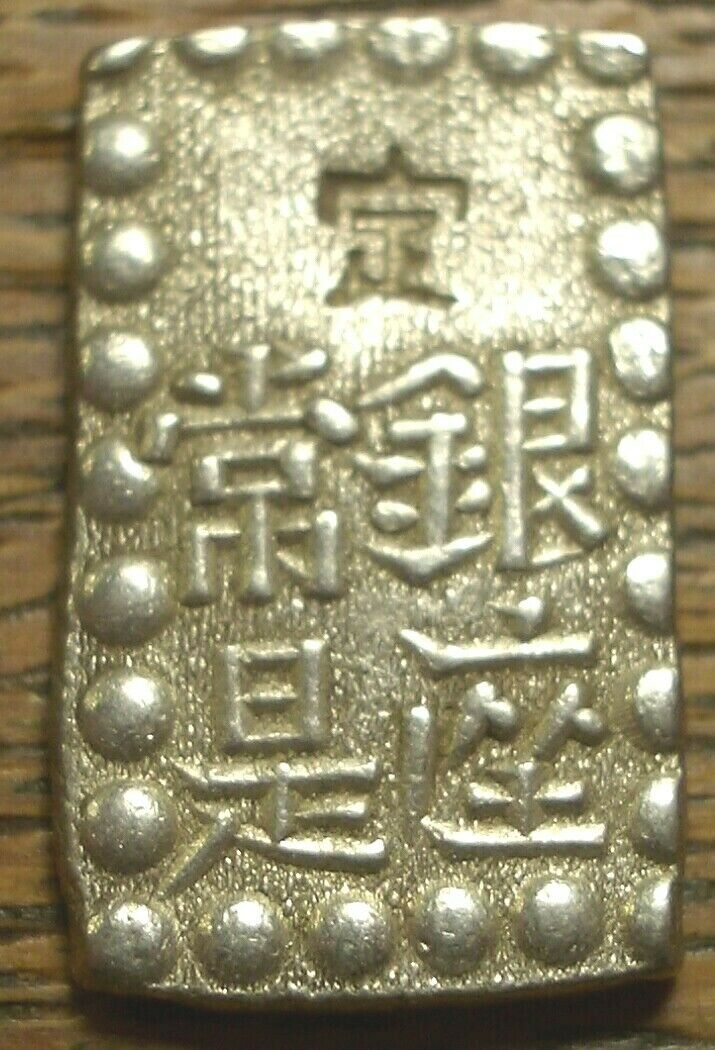 And lastly, we have here a silver bar-coin marked with a value of 1 Shu. It is about 9 mm wide and 16 mm tall, and 1.5 mm in thickness. This type is called Kaheishi Ichibugin, and was issued between 1868-1869, at the end of the Hansatsu use.