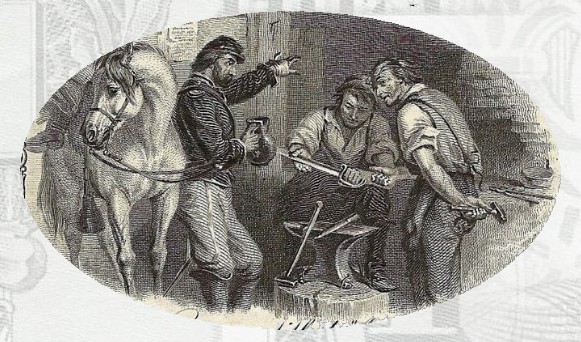 At the end of the Civil War the State of Kansas submitted a petition to the US Government for damages resulting from the war. The petition specifically addressed actions resulting from a Confederate excursion that was known as the ‘Price Raid’, and the Union’s ‘Indian Expedition’ under General Samuel R. Curtis.

By 1864 the Confederate Army found itself on the losing edge. In an attempt to bolster both public support for the South and to gain territory and supplies, a plan was devised to send Confederate Major-General Sterling Price into the states of Missouri and Kansas to conduct raids on the Union Military. The plan was to retake Missouri, enter Kansas and scour the land for mules, wagons and other supplies. Leaving in August 1864, Price left with 12,000 men and a small contingent of artillery. During the raids, Price and his men also killed and robbed unarmed civilians and pillaged private properties. Though these actions were not uncommon on both sides of the war, the Price Raid became infamous for its actions and was estimated to have cost over $500,000 in damages.

General Samuel Curtis was a Union General in charge of the Department of Kansas, and was tasked to defend the western frontier during the Civil War. He was specifically sent to deal with hostile Indians, primarily Cheyenne and Lakota, who were conducting attacks on travelers through their territory. The reasons for the attacks were many, including the spread of disease, devastation of the grasses for grazing, wholesale reduction of timber, and other misuse of lands and nuisances. These attacks were effective and became disruptive to the U.S. Government and tocompanies transporting freight. Eventually General Curtis was made to conduct an Indian Expedition, which enlisted “friendly” Pawnees to fight against the other Indians. Curtis also enlisted what were called “Galvanized” Yankees (ex-confederate soldiers serving in the Union Army) to conduct general military operations in the area. As a result of the Indian Expedition, the affected Indians attacked more fervently, and chose additional targets, causing what was believed to be more damage than if the military had not acted at all.

By October 1864, two months into their raid started, the Confederate expedition had confiscated over 500 wagons of supplies and it seemed as if it was a success. In addition, while it was much less than he had hoped for, it is estimated that as many as 6,000 men joined up with Price while he was in Missouri. Under their long wagon train the Confederate march began to slow down, allowing the Union forces more time to act.

After the Indian Expedition, General Curtis joined up with others to stop the Confederate raids. Combining militias from Kansas and Missouri with several other Federal units, the Union forces totaled somewhere around 35,000 men pursuing Price’s ever slowing force of about 18,000. Several battles ensued, following Price on his way westward. At first, as the Union forces were just assembling, Price was able to win a few skirmishes, and keep the Union Army at bay, continuing his snail’s pace.

At the battle of Westport, Missouri, Price was faced with Union soldiers in front and behind his long column. Instead of fleeing south, he decided to fight. After several hours of fighting, it became apparent that he could not win. Price then retreated back south, towing a 15 mile long wagon train of booty behind him. This line of wagons was acting as an anchor and was the undoing of the Confederate’s raid.

Passing through the winding Mine Creek, Price crossed a ford at the head of the line, but about halfway through, the banks softened and the wagons began to bog down, and soon were stuck hard. Price was oblivious of the situation. The Union forces in pursuit from the battle of Westport were soon upon the stranded Confederates and as the rebels were scurrying to make a stand, the Union, vastly outnumbered, but better armed with repeating rifles and pistols, started a cavalry charge. After a brief stall, the Union soldiers broke the rebel’s lines and in less than 30 minutes, the battle was over with the Union army defeating their enemy due in large part to their weaponry and to the quickness of their charge. Price was followed, but he decided to abandon the wagon train of loot and burn it. Thus unburdened, he found his way back south to Texas, safe and unharmed.

After assessing the petition, the U.S. Government agreed to pay out assessed damages resulting from the Price Raid and the Indian Expedition. Kansas distributed the money to the claimants in banknotes under the title “Union Military Scrip”. The following $5 banknote is an example. The uniface note was printed by the Continental Banknote Company in New York.

Little known outside the world of collectors and a few military veterans who’ve used them, the Military Payment Certificate (MPC) has been around as a type of a chit used to pay for goods and services on bases. They are no longer used, nor can they be redeemed, but they are an important sideline in the history of United States paper money. While some were nothing more than text on paper, most of these were steeped with imagery of American symbolism including Liberty, tanks, planes, a submarine, soldiers, sailors, American Indian Chief Hollow Horn Bear, a bison, and of course several pretty women. Issues were in denominations of 1, 5, 10, 25, and 50 cents and 1, 5, 10, and 20 dollars.

Below is a military payment certificate series 681 $1 note issued in 1969. This note depicts an Air Force pilot on the front and the Thunderbirds flying F-100 Super Sabres in formation on the back. In the spring of 1969, they switched to the newer F-4E Phantom II.

While the MPC’s were not issued after 1970, things called Pogs are currently issued to members overseas for use in the Army and Air Force Exchange Service (AAFES) base and post exchange stores. These pogs are simple round cardboard discs issued in 1, 5, 10 and 25 cent denominations with a plethora of computer printed images on them. Below are just a few. 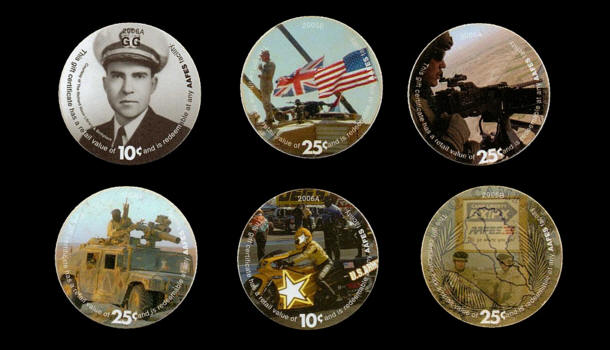 The next entry is not a banknote, though some were able to be used as such.

This is a Controller’s Warrant from the State of Nevada. A Controller is a position similar to a comptroller or treasurer, managing the accounts and funds of a government office. A Warrant in modern times looks and acts like a modern check. This one is quite massive, however, measuring a whopping 5-5/16” x 10-5/16” or 13.5cm x 26.2cm. A Warrant is an order instructing another governmental department treasurer to pay the named person on the warrant. It may also declare that funds must be used from specific funds in order to maintain the proper accounting. Often they can be post-dated and be paid out only after a specified date. This one was issued on Feb. 24th, 1877 and paid on Feb. 25th, 1877, as annotated on back. In some cases, they may also state that the funds could be paid to the bearer, meaning that it could be used as a type of currency, if the recipient were trusting enough of the payee and the warrant.

The Warrant for $56.00 was made out to W. L. Ross for serving 7 days as a member of the senate.  It was signed by W. W. Hobart, then the serving state controller. The ‘X’ shape most clearly seen on the back of the warrant is what is called a cancellation, or a cut cancellation. This type was made with a punch, while other cancellations were simply made with a sharp blade. Cancellations are similar to the Paid stamp, in that if it exists, it means that it is no longer valid and the funds have bene paid, and the item itself, whether a warrant or banknote, can be kept for record-keeping purposes, or placed into a collection 142 years later.

William L. Ross served as a senator in the Nevada State Legislature from 1874-1878.
He was also on several committees including:

Cited on page 83 that W. W. Hobart “…as State Controller proved himself one of the ablest financiers of Nevada, introduced a salary reduction bill.” His actions, though lowering some of the salaries by as much as $1,200 and saved the state $26,400 per annum. While this may sound paltry by today’s salaries, in 1877 it was substantial. Here’s a look at what some of the salaries were at that time, and how Hobart’s reduction affected them:

Local currencies are world-wide today, and several have enjoyed some time even the USA where the government is usually quite adamant about using other forms of currency than the US Dollar.

A local currency acts as an alternative to a national currency, and aims to encourage spending within specific local businesses. The aim of such organizations is to use their money as to achieve their agendas, usually a social or, as are becoming more frequent, an environmental objective. However, most local currencies have had limited success in stimulating local economies, and are often short lived. In a way, these are similar to Disney Dollars or a similar type coupon, where they can be exchanged only in certain participating stores. Some even charge a premium to purchase their currencies, and use the additional fees to cover expenses of their organization.

Bay Bucks is a Traverse City, Michigan currency that according to an article in the Northernexpress.com on June 09, 2004, Bay Bucks: “is the “missing piece” that will tie together our region’s agricultural, service, craft and retail sectors, along with environmental efforts such as the land conservancies” and again: “A local currency will create an awareness of the local economy and become a symbol of the possibilities in local ties.” – Whatever that means.

At the time of this writing, the organization was effectively ended.

It claims to be the only local or alternative currency received approval by the US Government, specifically the departments of the: United States Attorney General, US Treasury, Secret Service bureau. Each AFRO Dollar is backed by a US Dollar held in reserve by participating member banking organizations. Their claimed process is that the participating banks would exchange A.F.R.O Dollars for U.S. Dollars to local residents in the community, and use them in lieu of actual money.  As of 2021, there were plans to create a digital currency as well.